Yeast Overgrowth and Its Influence on Autism – My Spectrum Heroes

Healthy gut microflora is well-known for the role it plays in digestive and immune system function. For individuals with autism, gastrointestinal distress and immune dysfunction are common problems that often develop due to an issue called dysbiosis, which refers to an imbalance of gut bacteria.[1, 2] Furthermore, new evidence indicates that gut microflora also influence mental development, performance, and behavior in individuals with autism. [1]

Symptoms Of Candida Overgrowth include:

Given the significant digestive and behavioral changes that may occur in children with autism who demonstrate ongoing dysbiosis, steps should be taken to frequently monitor gut microflora to ensure that the optimal balance of healthy intestinal bacteria are maintained. Addressing increased gut permeability or “leaky gut” can be beneficial, as well.

Probiotic supplementation is beneficial toward improving both intestinal and behavioral symptoms because healthy bacteria release enzymes that can break down the protective layer of Candida, preventing them from growing and multiplying[6]. Therefore, probiotic supplementation is an important aspect of nutrition for children with autism as it provides long-term benefits that have been demonstrated through clinical research.

My Spectrum Heroes™ has a variety of supplements that can help support gut health and improve issues related to yeast overgrowth.

The My Spectrum Heroes™ GI Shield is designed to promote the health and barrier function of the Gastrointestinal lining. This is a go-to product to take-on leaky gut!

Our son was diagnosed with ADHD a few years ago and has always struggled in school. We decided to not medicate and take a more natural approach such as his nutrition. I found this a month ago and have noticed a big difference. My son finally gets great sleep and is able to take on the day in the morning! We are so thankful that we have found My Spectrum Hero’s! 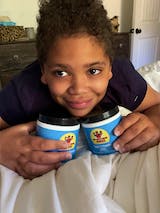 After reading some negative comments about prolonged use of laxatives in children with tics, we began a search for a safe alternative for my 6-yr old nephew who struggles with constipation. He has made a smooth transition between the two products. The Fiber Balance Plus is palatable and dissolves well in a small juice and water mixture when shaken. We couldn't be more pleased with this product that is keeping our boy comfortable. Thank you.

A
Multivitamin Mineral Plus Anonymous
4

It works. my kid used to put everything in mouth, lick everything she get. But after two weeks this is improved and almost stopped. May be it takes couple of months to improve the cognitive health. I keep on the finger crossed 🤞🏽.
Only problem with this is it’s so easily oxidized. Very hard to keep it dry. I need some helpful tips to save from moisture.

When I first purchased this product I was taken back by it size. However, I decided to give it a go. It's odorless and tasteless, which makes it great for my son's smoothies! I purchased one container and a family member purchased a second. It wasn't until I ran out of the second container that I noticed a difference. I didn't realize how much of a difference this made until it was gone. This little guy packs a powerful punch! My son's even been asking to buy some more. Definitely worth the purchase. My son is on the spectrum but I feel like this product is a must for all.

I've been using these products for one month and the results are mind blowing! My son has increased his vocabulary, eye contact, he's also much calmer and focused! Thank you so much to this company