Magnesium has become a popular mineral for a wide variety of health concerns. When you consider that it’s the fourth most abundant mineral in the body, it’s not hard to see why it’s essential for so many aspects of good health.(1)

Magnesium is an essential trace mineral that’s critical for healthy bones and is involved in over 300 biochemical reactions including energy generation in the cells, for making our DNA, and much more. In addition, this mineral fuels brain energy and eases the passage of information through the central nervous system, imparting a soothing effect to the nerves. It also plays a role in making the key calming neurotransmitter, serotonin.

Some key factors to consider:

For kids with ADHD or ASD, brain energy and a calm nervous system are key areas of focus; however, research shows that magnesium is one of the minerals that is commonly deficient in children with ADHD and ASD.

In one study on children with ASD, which assessed and compared plasma and red blood cell concentrations of magnesium in children with autism to those of typically developing children of the same age, children on the spectrum had lower plasma magnesium than the other subjects.(2)

When magnesium is too low, cognitive ability can drop, along with attention span. In addition, aggression can increase along with fatigue and lack of concentration.(3)

In one study, magnesium deficiency was found in 72% of the ADHD children. However, magnesium supplementation resulted in improved cognitive and only minor side effects were reported.(4)

Since kids with ADHD and ASD often require larger quantities of magnesium than what their diet provides or what their gut is able to absorb, supplementation is a great way to provide enough of the mineral to enjoy the important benefits it imparts.

Another way to get in some extra magnesium is by taking an epsom salt bath. Epsom salt is actually Magnesium Sulfate and when dissolved in the bath water, can be easily absorbed through the skin. Most kids love bath time, so this is an easy way to get this amazing mineral boosted without much effort at all! 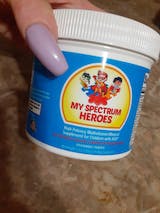